It’s now possible to boost declining levels of cellular NAD+, a molecule required for hundreds of metabolic processes in the human body. Read the results of our study in Nature Partner Journals. The impact of supplements designed to increase NAD+ on the aging process is still being studied.

We are committed to conducting rigorous scientific research and sharing it with our customers, which is why we publish our work in open access, peer-reviewed journals. The results of our recent clinical trial on the safety and efficacy of Basis were published in Nature Partner Journals: Aging and Mechanisms of Disease.

Here, we take you through the most important elements of the trial.

The first-in-humans, double-blind, placebo-controlled, randomized study assessed the safety and efficacy of taking repeat doses of Basis — a combination of nicotinamide riboside (NR) and pterostilbene — in a population of 120 healthy adults ages 60-80. The results? Regular doses of Basis increased cellular NAD+ levels by an average of 40 percent.

A properly functioning cellular metabolism is essential to health. In the scientific sense of the word, metabolism refers to the sum of every chemical reaction that happens inside the body, an enormous web of interactions on the molecular level that aim to keep you in what biologists call homeostasis: a state of balance, best illustrated by our near constant body temperature, which persists even in a wide range of circumstances. This is all made possible by an elegant choreography between coenzymes (or, “helper molecules”) and specific proteins acting as metabolic sensors, attuned to, and responding to ambient conditions in the cell and the body as a whole. The coenzyme nicotinamide adenine dinucleotide (NAD+) and a family of proteins called sirtuins make up an important part of this choreography.

First discovered in 1906, NAD+ is a coenzyme found in all living cells, and it has two main categories of roles in the body. One is turning nutrients into energy. In that process NAD+ transfers electrons in redox reactions to help synthesize ATP, the energy currency of the cell. Importantly, NAD+ isn’t “used up” or consumed in creating energy. In the other category of roles, NAD+ works with proteins to carry out essential biological processes like cellular energy creation, cellular metabolism, and maintaining healthy DNA. Sirtuins are some of the proteins that play a key role in regulating cellular homeostasis and metabolism. Sirtuins also stimulate the activity of the mitochondria.

Several things are important to know about the relationship between NAD+ and sirtuins. Sirtuins only function in the presence of NAD, and NAD+ is used up in this process. This means that the body needs to constantly synthesize it. Finally, cellular NAD+ is known to decline in organisms, including humans, as they age. The impact of supplements designed to increase NAD+ on the aging process is still being studied.

Basis combines the ingredients nicotinamide riboside and pterostilbene with the goal of synergistically supporting metabolic health by increasing cellular NAD+ levels and activating sirtuins. Since human data on NAD+ supplementation is limited — one previous study on 12 participants showed that NR could increase NAD+ levels in the blood over a 24-hour period — our study sought to determine whether cellular NAD+ levels could be sustained over the study period: eight weeks, and it did.

We did that in a placebo-controlled trial of 120 healthy adults between the ages of 60 and 80, the first repeat-dose trial for NR as well as the first test of the combination of NR and pterostilbene in humans. The results? Participants taking the recommended dose of Basis (250 mg of NR; 50 mg of pterostilbene) saw cellular NAD+ levels increase by an average of 40 percent over baseline after 30 days, a number that was sustained at 60 days. Participants taking twice the recommended dose of Basis saw their cellular NAD+ levels increase by 90 percent over baseline after 30 days and 55 percent at 60 days. And those taking the placebo had no NAD+ increase at all. There were no serious adverse events reported in the study.

The science of NAD+ is thriving. The study demonstrates that NAD+ levels in whole blood can be sustainably increased in humans by taking Basis. This study represents an important first step that future clinical studies can build upon — and these trials are underway.

The clinical trial was conducted using the best practices with respect to ethics and trial design. It’s most similar to a phase one trial that pharmaceutical companies are required to conduct in the early stages of drug development. This study was a randomized (participants randomly assigned to groups), double-blinded (neither participants nor researchers know which group gets placebo, regular dose, double dose), placebo-controlled (one group gets an inactive substance) study carried out at testing sites in London, Ontario (Canada), Orlando, Florida, and Irvine, California.

Since the primary objective of the study was to evaluate safety and tolerability of Basis, we also tested a variety of biological markers to add to the existing body of evidence confirming that the ingredients in Basis are safe.

The main secondary objective of the study was evaluating the potential benefits of Basis in increasing the concentration of NAD+ in the blood. The sample collection, preparation, and analysis of NAD+ in the blood required an original method that was created specifically for this trial. 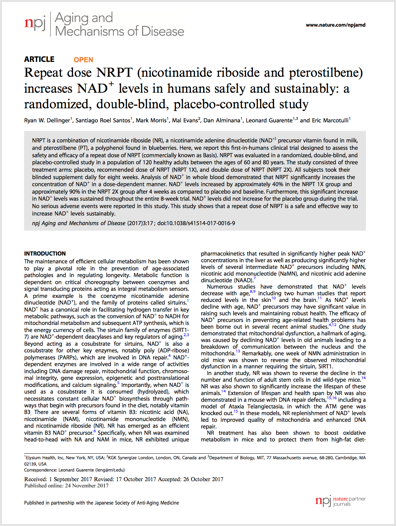 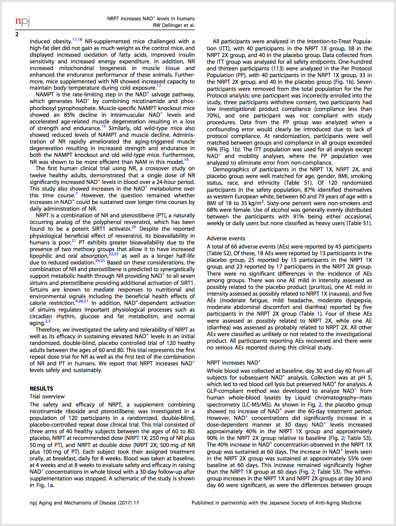 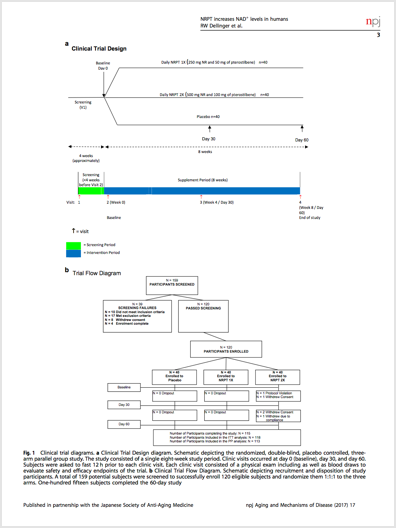 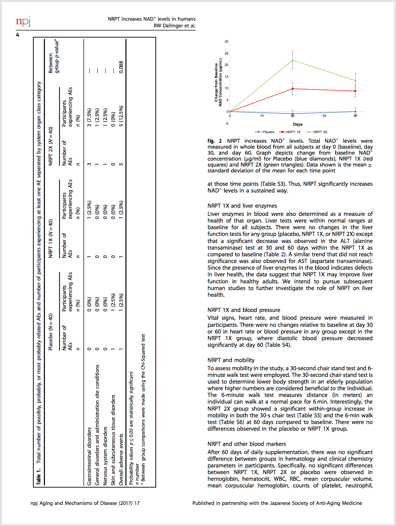 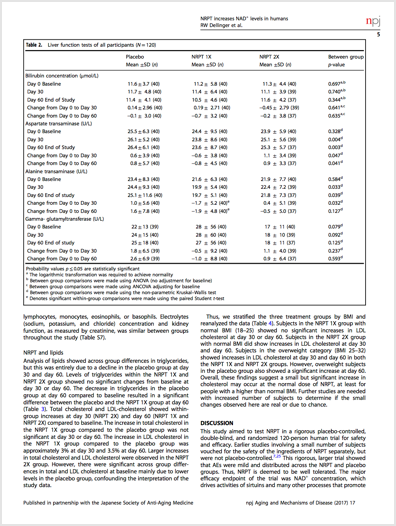 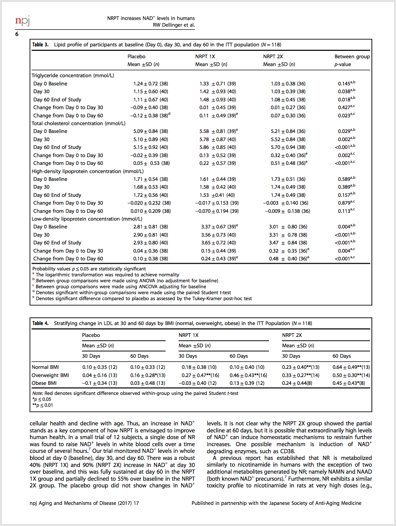 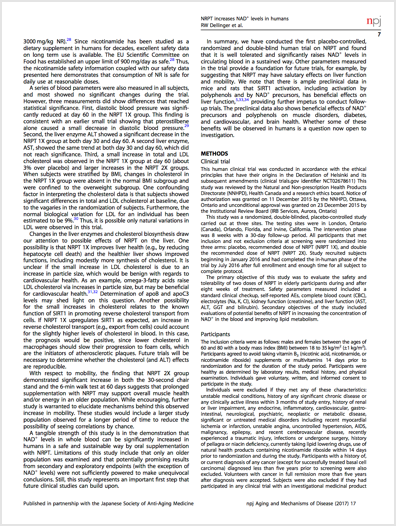 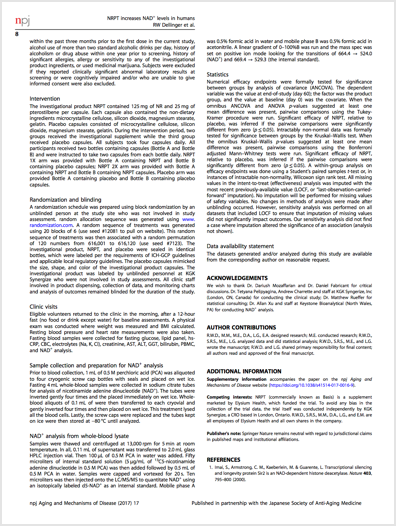 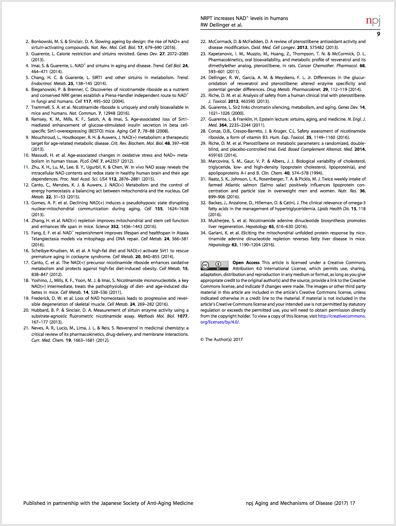